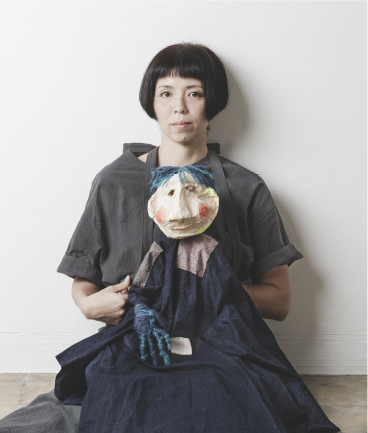 Erina established her career as a performer in the productions directed by Yukio Ninagawa. She founded an artistic collective, Utervision Company Japan, in 2011 and has performed nationally and internationally since. Incorporating the figure theatre to her practice, Erina created her unique performing style, combining physical theatre and puppetry.

Trained in the Stanislavski’s system under Leonid Anisimov (Merited Artist of the Russian Federation). Learned puppet design under Noriyuki Sawa, a lecturer at DAMU, Academy of Performing Arts in Prague. Also trained under Eric Boss of Sandglass Theater and learned Performing Arts and puppet manipulation.

In 2013, Erina started the creative workshop series “Tane no Atelier” to disseminate the joy of being creative to people of all ages and with diverse levels of experience.

She established this workshop series as a corporation in 2015 as Specific Non-Profit Organization Tane no Atelier. Erina is also experienced in international cultural exchange and has conducted workshops for over 3,000 educators and puppeteers in Vietnam, Thailand, Taiwan, Laos, Singapore, Brunei, and Hong Kong. Participated in APEX (ASEAN Puppet Exchange) since 2015, creating collaborative performance work with artists across ASEAN countries. She opened “Puppet Theatre for Children” in 2016 in Shinagawa City, and in the following year, she devised and directed a performance, Adventure of Sinbad, at Harmony Hall Fukui with 19 school children. In 2017, Erina started an exchange with Laos National Puppetry Theatre and participated in a touring production in Sainyabuli, North Laos. She was also selected as a Fellow for Asia Fellowship by Japan Foundation Asia Center in 2018 and conducted a research project on spiritism of minority ethnic groups in Laos, which resulted in a collaborative theatre performance, “Let There Be Light ” .

Also in 2018, she performed Momo by invitation in Yunlin Festival, Taiwan, and invited to collaborate with Vietnamese artists at Vietnam National Puppetry Theater, Hanoi, which resulted in a collaboratively devised piece, One Day. Performed A Tale of a Bamboo-Cutter at Taichung World Puppet Festival, Taiwan in 2019.

In October 2020, Erina created Night on the Milky Way Train (filmed production) and Building Hypothesis as the result of her exploration into developing and sharing performance work in the restriction due to COVID-19 pandemic. In an outdoor performance, Kappa, co-produced with Kita city Culture Foundation, she experimented with a different audience experience by placing audience members inside the building, looking out at the show. She also produced “Xais thiab Xais / Ukibori”, based on a folk tale of the Hmong people (Laos’s minority ethnic group). She will perform Kandata in a competition in Egypt, as the first Japanese artist to be nominated to perform. 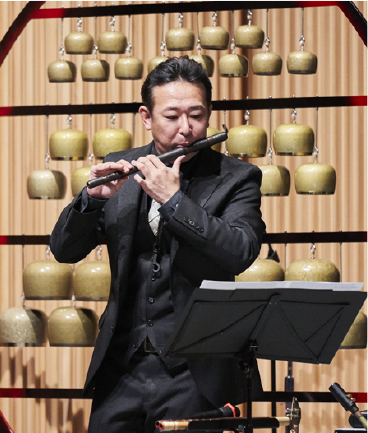 Surrounded by music from a young age, Yutaka studied Gagaku (Japanese traditional music) at the Department of Traditional Japanese Music of Tokyo University of the Arts.

He performs in productions in Japan and beyond as a Gagaku performer who specialises in Fue (flute), Biwa (lute), and Samai (dance). Trained in Fue and Samai under Shogo Anzai, a former Head of Music Department in the Board of Ceremonies, Imperial Household Agency.

Yutaka also participated in a band, Shibusa-Shirazu, as a jazz saxophone player and performed in CD recordings, Europe Tour (23 stages in eight countries in 1999, four stages in two countries in 2002), and FUJI ROCK FES. Since he left the band, he has been producing music for stage productions, TV drama and commercials, using a variety of instruments and objects. Yutaka’s work explores the interfaces between “tradition and avant-garde” and “the East and the West”, as seen in his composition for JR Takaoka station with a Buddhist altar article, Orin.

Yutaka is a founding member of Utervision, composing and directing music for most of the productions: Utou, Kanzeon, My Sunshine (both Koike ver. and Miura ver.), A City with Monuments, In the Woods Beneath Cherry Blossoms in Full Bloom, Le petit roi, The human figure, Ango/Sakura, My Own Criminology: A Story of Adam and Eve, Wardrobe ～She is Gone〜, “Kudan no Ken”, “Xais thiab Xais / Ukibori”.

Masao joined a theatre company Salad Jelly while at Waseda University and he performed, choreographed, and directed the company’s productions that combined theatre and dance. Since completing his study, Masao performed in stage productions and worked with a diverse range of directors and choreographers. He also participated in shows as a backup dancer and a choreographer and appeared in TV commercials.

Since he became a freelance dance artist, Masao has created unique and poetic dance performances that express the ambivalence of human life, incorporating words and objects. Masao performed in collaboration with Sogetsu ikebana master in a live show in July 2010.

His work as choreographer includes One on One, musical theatre produced by Fuji TV, and other stage performances. He is known for his physical movement workshops which he offered to dancers, actors, children, and people with disabilities. A guest tutor for a lecture series, “Psychology of Creativity” at Department of Education, University of Tokyo. In 2014, Masao founded a creative collective, Masaoption. Masao is a founding member of Utervision. 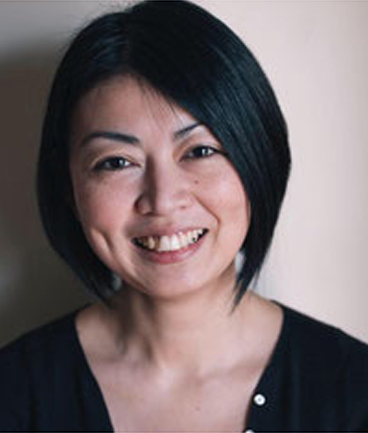 After completing her study in French Literature and English Literature in Kyoto, Moe has been based in the UK since 2010, studying and researching Contemporary Theatre and Performance. She also has experience in producing performance festivals, devising performance works, and translating texts and subtitles.

Moe co-founded WROUGHT Festival which focused on One-to-one performance and co-produced two iterations of the festival in 2014 and 2016. Along with her co-producer, she was responsible for overall production of the festival, including curating, designing the aesthetics and logistics for the festival, and communicating with the artists.

She recently completed a PhD in English Literature (Theatre and Performance Studies) at the University of Sheffield. Moe joined Utervision in 2014 and has participated in most of the company’s international productions as overseas production manager and translator since. 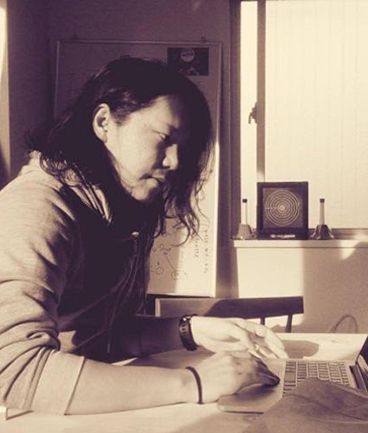 He is an award-winning programmer and earned second place (Asia) and 49th place (World contest) in ICPC. Involved in developing Gran Turismo 5 and 6 (a racing game for PS3) at the company funded entirely by Polyphony Digital Inc. He also participated in Interactive Team in teamLab Inc.